All of the official icons included in Leopard 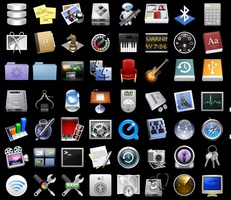 Advertisement
Need official Leopard icons but don't have much time to search the Internet? We offer an alternative so you have all of them without having to look any further.

The Official MacOSX Leopard Icon Pack includes more than 60 official icons from the new version of the operating system in two formats: ICO and PNG.

Inside the package are the most important icons, from system tools such as the Finder and TimeMachine, to the most used applications such as iTunes and Safari.

The PNG images are 512x512 pixels in size, more than enough for any project.
Reviewed by Álvaro Toledo
Advertisement

Grand Theft Auto V Wallpaper
Get incredible images from GTA V on your desktop!
FastIcns
Desktoptopia
Must Have Icons
More than 50 high-quality icons to replace the Mac defaults
EarthDesk
Set an interactive world map as wallpaper or screensaver
Skyline
The official desktop of Skyline, the movie
AutoWallpaper
Have the background changed automatically
Wally
Change your desktop wallpaper automatically